In the title race Malcolm Lees dropped two points tonight. It was Lees’ second league encounter with Dave Gladman and it finished with the same scoreline as the first, 1-1. Gladman led 1-0 at half-time after firing home at close range. Straight from the second half kick-off Lees drew level. Both players had chances to win the game but the draw was a fair result. Lees went on to pick up three points against Ronnie McKenzie who started the game well with good possession. Midway through the first half, however, Lees took the lead and went on to add two further goals before the end. Scoring the first goal was crucial although McKenzie could consider himself unlucky in the manner by which he conceded two of them. At the top of the league Lees now has a four point lead over Burns and has a game in hand. Willie Fleming could overtake Burns should he win all the games he has in hand.

McKenzie had better luck against Baver Bari although he only just survived a second half onslaught. McKenzie played really well in the first period and fully deserved his 3-0 half-time lead. But this was a game of two halves and it was a different Bari who emerged after the break. He pulled two goals back but ran out of time to complete the comeback.

Colin Berry has been having a good league campaign up until now, having lost only two matches. Tonight, however, his number of defeats doubled. Admittedly they were against top players but he will be very disappointed with the 6-0 defeat to Tom Burns. He was definitely not pleased when later in the evening he was drawn against Burns in both cup competitions. His other defeat was to Willie Fleming in their first meeting of the season. In his third match Berry had to come from behind to draw with Baver Bari. 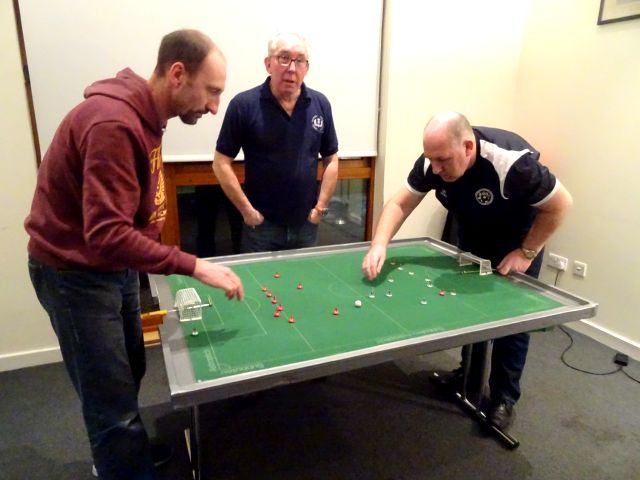