Tom Burns was presented with the Glasgow Cup after last week’s victory over John Halpin. 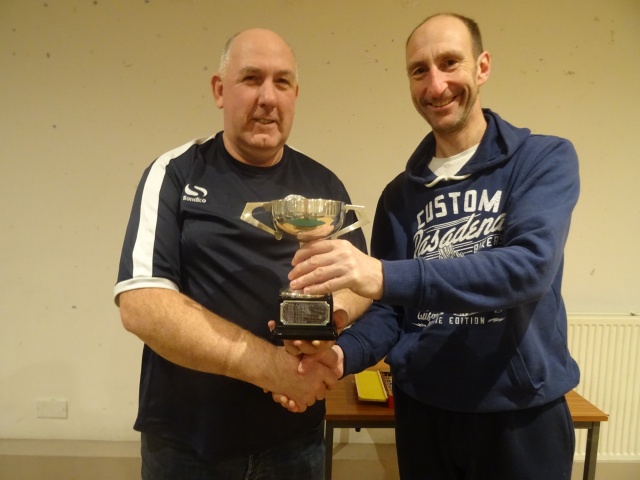 After the previous busy two meetings only four players were present tonight. John Mathieson and Brian Spoors had travelled to Edinburgh for the Capital Cup organised by the new Edinburgh club.

Two Glasgow Cup matches were played. In group A Dave Gladman defeated Baver Bari 2-0. Gladman led 1-0 at half-time. In the second period Bari pushed forward and there was some nervous defending by Gladman. Late in the game, however, Gladman broke forward and sealed the match with a second. He has now consolidated his position at the top of the group. In group B Tom Burns recorded his second win, beating Colin Berry. Berry started well but two Burns goals in the space of a minute mid-way through the first half won the game.

The club will now have a Christmas and New Year break. The next meeting will be on Monday 6 January.

All Glasgow Cup results can be viewed here.