Dave Houston returned to action this evening and will probably be satisfied with his haul of six points from a possible nine. His first match against John Halpin couldn’t have started better with Houston netting in the opening minute. He didn’t have many shots after that but he didn’t need them. Halpin huffed and puffed but couldn’t find any rhythm to his game. Poor finishing and good Houston defence meant there was no further scoring.

Next up for Houston was Willie Fleming. Fleming dominated this match but Houston in defensive mode is difficult to break down. Only once did Fleming manage to breach those Houston defences but in Fleming’s mind once was enough. 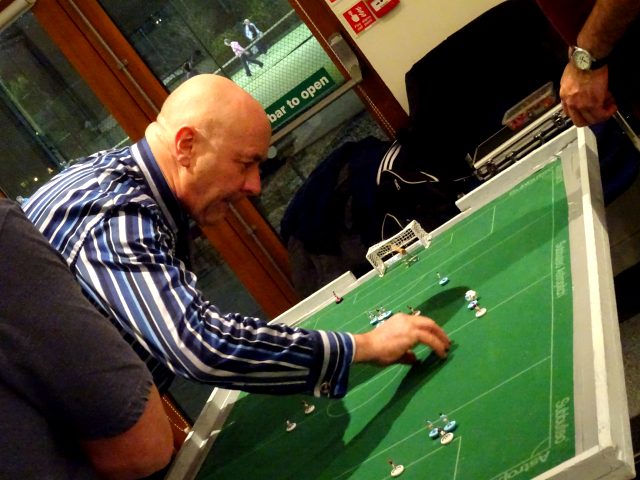 Houston will be most pleased with his 3-1 win over Dave Gladman if only for the fact of scoring that number of goals. Houston went straight from kick-off to have a first attempt at the Gladman goal. Thereafter Gladman dominated possession and really should have made more of the opportunities he created but the scoreline remained blank. It was Houston, however, who took the lead not long after the re-start. Two heavy Gladman block flicks allowed space for Houston to shoot from a central position and go ahead. Shortly after, an improbable shot from distance doubled Houston’s lead. Two minutes from the end Gladman pulled one back after a corner but as he strove for an equaliser he loosely gave away a throw-in from which Houston restored his two goal advantage. Victory moved Houston three places up the table.

One Glasgow Cup match was played where Tom Burns beat Dave Gladman 2-1. Gladman employed a faster and more expansive style of play than normal and took the game to Burns. For most of the first half he seemed the more likely to score but as so often happens the opening goal came against the run of play and it was a lead that Burns held until half-time. In the second half Burns found he had much more possession than he would normally have against Gladman and he made it count by going further ahead not long into the half. Gladman did reduce the Burns’ lead later in the half but after creating many more chances than he normally would against Burns, he would have hoped for a better return than that single goal.